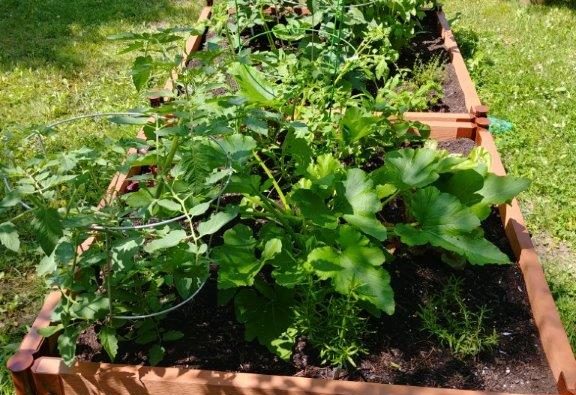 When the call went out for volunteers for a Green Thumbs Committee at NOSM, Natalie Lefort was quick to answer. She is the School’s Research Laboratory Coordinator and has a flair for gardening. The group started out maintaining flower beds at NOSM at Laurentian University and shortly thereafter built a full-scale vegetable garden behind the medical school building.

“I signed up to take care of landscaping and later on Kate Beatty asked if anyone wanted to build a garden in the back. Of course, I said ‘Yes!’ I took the lead on that, along with anyone who wanted to help,” says Lefort.

The NOSM Healthy Workplace Group (HWG) spearheaded the initiative when they put out the initial call out for the Green Thumbs Committee.

“I was surprised, having never been involved in the Healthy Workplace Group, as I didn’t know that these opportunities existed,” said Lefort. “I was excited to do something for my colleagues and the learners, and to be part of all of the great advantages of gardening.”

It was mid-summer by the time the garden was fully constructed and ready for planting. In order to get a jump on the growing season, they purchased young plants from a greenhouse.

“We planted tomatoes, zucchini, herbs, Swiss chard, green onions, cucumbers, and green peppers,” says Lefort. “Once we had some mature veggies, we harvested them and placed bowls of them in the various NOSM lunch rooms for people to take to savor right away or bring home.”

Rysdale had the idea to incorporate the harvest into NOSM’s Culinary Medicine Labs scheduled for September 2019 – when the medical students and dietetic learners come together to explore recipes and prepare meals.

“We received cherry tomatoes and regular-sized tomatoes from the garden harvest and included them into two recipes,” says Rysdale. “We were feeding almost 30 people that day, so we used a small portion of the ingredients from the garden, and I let the students know where they came from.”

The medical students and learners in the group commented about how impressed they were to have “the opportunity to work with real food.”

Now the Green Thumbs Committee is considering the next phase of plans for the NOSM garden. “It would be interesting if the students were involved in growing the food but maybe that’s a future initiative,” says Lefort. “Our goal was just to get the first garden up and running. This coming spring we’ll definitely plan for new initiatives and for the September harvest.”

Other volunteers also joined in to contribute to the NOSM garden in Sudbury, including Pam Tallon, Research Lab Coordinator in Thunder Bay, and Field Good Farms in Cache Bay, Ontario, who shared their knowledge of building, maintaining and harvesting a garden.

In 2020, the Green Thumbs Committee is planning to focus on general gardening skills: “There is talk about having a ‘How-to’ gardening series on topics including planting seeds,  transplanting little plants, maintaining a garden, and harvesting,” says Lefort.

She says this spring they plan to plant more of the popular foods including cucumber, green peppers and tomatoes. They also want to try a few new vegetables like multi-coloured carrots, and new techniques including building covers to extend the growing season.

Perhaps the biggest health benefit to the School was that the garden mobilized people.

“Working on a garden meant a lot of things. At a personal level it brings you together outside and it feels like a community contribution. Growing your own food is delicious and healthy, it lessens the environmental impact, and is something people can do at home and anywhere,” says Lefort.

“It shows the possibilities of what we can do in the North.”

Serve it over lettuce leaves for added colour and crunch