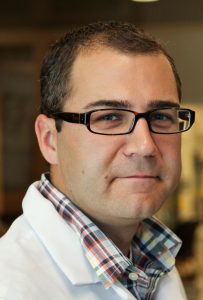 Michael John Page was born to Sonja and Roger Page in 1975. Raised in Thunder Bay, Michael graduated from Port Arthur Collegiate in 1994.

In September 1994, Michael moved to Ottawa to study biochemistry at Carleton University, where he graduated with his BSc in 1998. He then moved to Vancouver, British Columbia and entered the University of British Columbia’s (UBC) graduate program in biochemistry and molecular biology. Michael was supported by a competitive graduate studentship grant from Canadian Blood Services.

In 2004, Michael successfully defended his PhD thesis, Bioengineering coagulation factor Xa substrate specificity into Streptomyces griseus trypsin.  Dr. Michael Page headed to Washington University in St. Louis, Missouri to complete a postdoctoral fellowship studying the biological activity of thrombin—an enzyme in blood that causes clotting.  As a testament to his work, Michael received a two year fellowship from the American Heart Association. His fellowship, extended for a third year, was followed by the prestigious Career Development K Award. In 2010, at the University of California, San Francisco, Michael developed one of his greatest achievements—a peptide probe that was able to detect blood clots in real time. This discovery won Michael and his team an entrepreneurship competition that led to a patent for the discovery, and later the creation of a company called Biopaint Inc. Michael’s patent—Restricted Interaction Peptide Technology—is in the control of UCSF.

In addition to his cardiovascular work, Michael was most excited about his research on early pancreatic cancer detection. Michael’s last research paper, titled Non-Invasive Imaging and Cellular Tracking of Pulmonary Embolism by Near-Infrared Fluorescence and Positron Emission Tomography, was published in Nature Communication, in October 1, 2015.

Michael passed away unexpectedly in 2013; he was a researcher with a passion for medical research. To honour his memory, the Page family has created the Michael John Page PhD, NOSM Graduate Research Award. Funds are awarded to encourage and finance graduate students who wish to gain research experience at the Northern Ontario Medical School in Thunder Bay.

Haemophilus influenzae type a (Hia) is an important human pathogen that can cause invasive respiratory tract infections and its mechanisms of virulence are currently unclear. This research will focus on the role of neutrophils in the interface between innate and adaptive immunity in response to Hia. Specifically, differences in the abilities of Hia strains to induce BAFF (B-cell activating factor) will be investigated. The experimental approach will involve developing an in vitro model of infection of HL-60 cells with encapsulated and mutant strains of Hia. In addition, expression of type I interferons, various surface markers, and cytokines (BAFF and tumour necrosis factor) will be evaluated to assess cellular activation by Hia. This research will contribute valuable insight into the virulence mechanisms of Hia and its evasion of the immune response via the polysaccharide capsule, which can aid in developing vaccines and therapies for people susceptible to disease.

This project is studying the effects of low-dose ionizing radiation exposure. Human exposures to ionizing radiation are almost all at very low doses, such as exposure due to diagnostic imaging or nuclear medicine in medical settings or occupational exposures. The specific aim of our research will be to study the effects of radiation exposure at various doses in both mice and in a tissue culture model to study cellular and physiological responses. We will be measuring markers of oxidative stress and various cellular mechanisms for radiation damage and DNA repair in cells. Physiological measures of growth (body weight), glucose metabolism (measured using PET imaging techniques), behavioral function and a number of molecular markers of oxidative stress in tissues will be used to characterize the effects of low dose radiation exposure in a mouse model.

This project is centered around the fetal programming model in conjunction with in-utero stress. Fetal programming is mediated in part by exposure of the fetus to elevated levels of the stress hormone glucocorticoid.  “Fetal metabolic programming” is the result of in utero adaptations to the stress which alters the function and metabolism of the developing fetus and continues to be present postnatally into adulthood. The specific aim of our project is to study the effects of glucocorticoid exposure in mice on glucose metabolism and inflammation using PET imaging and molecular biology techniques. Adipose tissue and circulating levels of inflammatory markers as well as glucose metabolism will be measured to understand the molecular mechanisms involved in glucocorticoid fetal programming.

This research is focused on investigating the role of resveratrol in an experimental model of age-related macular degeneration (ARMD). ARMD is one of the most common causes of vision loss in North America and Europe. Resveratrol is a natural polyphenolic compound found in grapes and red wine. Resveratrol has been shown to prevent retinal neovascularization and is known to possess antioxidant properties. Our project aims to examine the effects that resveratrol can have on preventing further progression of ARMD by measuring markers of oxidative stress and growth factor signaling. There is strong evidence for the role of nutritional supplements for patients with ARMD and our study may provide some insight into the role of antioxidants in preventing the progression of ARMD.