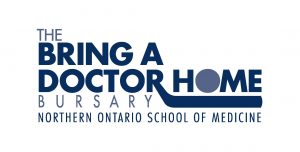 Since 2007, the Northern Ontario School of Medicine has been the recipient of the proceeds from the Bring a Doctor Home Hockey Tournament in Sault Ste Marie.  This annual tournament which began in 2005 was the dream of Hal Mogg from Sault Ste Marie.  Hal had a couple of goals with the creation of the tournament; first, to boost morale and community spirit at the Essar Algoma Steel Factory and to help support students from the Sault with financial support to attend NOSM.   The tournament has been an overwhelming success and is a much anticipated event in the middle of January in the Sault.

Since the tournament began back in 2005 it has raised over $407,500 toward student financial aid.

Back to Our Stories