Office of the Dean, President and CEO 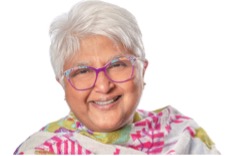 Dr. Sarita Verma is the Dean, President and CEO of the Northern Ontario School of Medicine. She was the Vice President, Education at the Association of Faculties of Medicine of Canada and is a Professor Emerita in the U of T Department of Family and Community Medicine. Formerly the Deputy Dean of the Faculty of Medicine and Associate Vice-Provost, Health Professions Education she is a family physician who originally trained as a lawyer at the University of Ottawa (1981) and later completed her medical degree at McMaster University (1991). She has been a Diplomat in Canada’s Foreign Service and worked with UNHCR in Sudan and Ethiopia for several years. In 2021 she was named one of the most powerful physicians in Canada and indicted into the McMaster University Alumni Gallery.

Dr. Verma is the 2006 recipient of the Donald Richards Wilson Award in medical education from the Royal College of Physicians and Surgeons of Canada; the 2009 co-recipient of the May Cohen Gender Equity Award from the Association of Faculties of Medicine in Canada and the 2016 recipient of the Charles Mickle Fellowship from the University of Toronto for excellence in medical education. For six years she held the position of Governor at the University of Toronto. She has been a board member of several teaching hospitals, namely the Women’s College Hospital, North York General Hospital, Trillium Health Partners the Michener Institute, Associated Medical Services and a member of and Chair of the Board of the National Canadian Residency Matching Service. She currently sits on the Board of the Thunder Bay Regional Health Sciences Center (TBRHSC) and the Association of Faculties of Medicine of Canada (AFMC), ICES, Health Services Organization (HSO), Associated Medical Services (AMS) and of the Health Sciences Network Research Institute (HSNRI) in Sudbury. Dr Verma was featured on Matt Galloway’s CBC The Current on June 10, 2021 which you can listen to here.

The Dean’s Office sets the direction for the Northern Ontario School of Medicine (NOSM) by establishing priorities that support the overall strategy, vision, and mission of the School.

The primary responsibilities of the Dean’s Office include overseeing school operations, communicating and advancing the School’s vision, and developing strategies to ensure the School meets it’s corporate, academic and social accountability mandates.

For more information about NOSM’s Board of Directors or Academic Council, please visit the Office of the Corporate Secretary and Governance section of our website.

Office of the Dean, President and CEO

Office of the Corporate Secretary